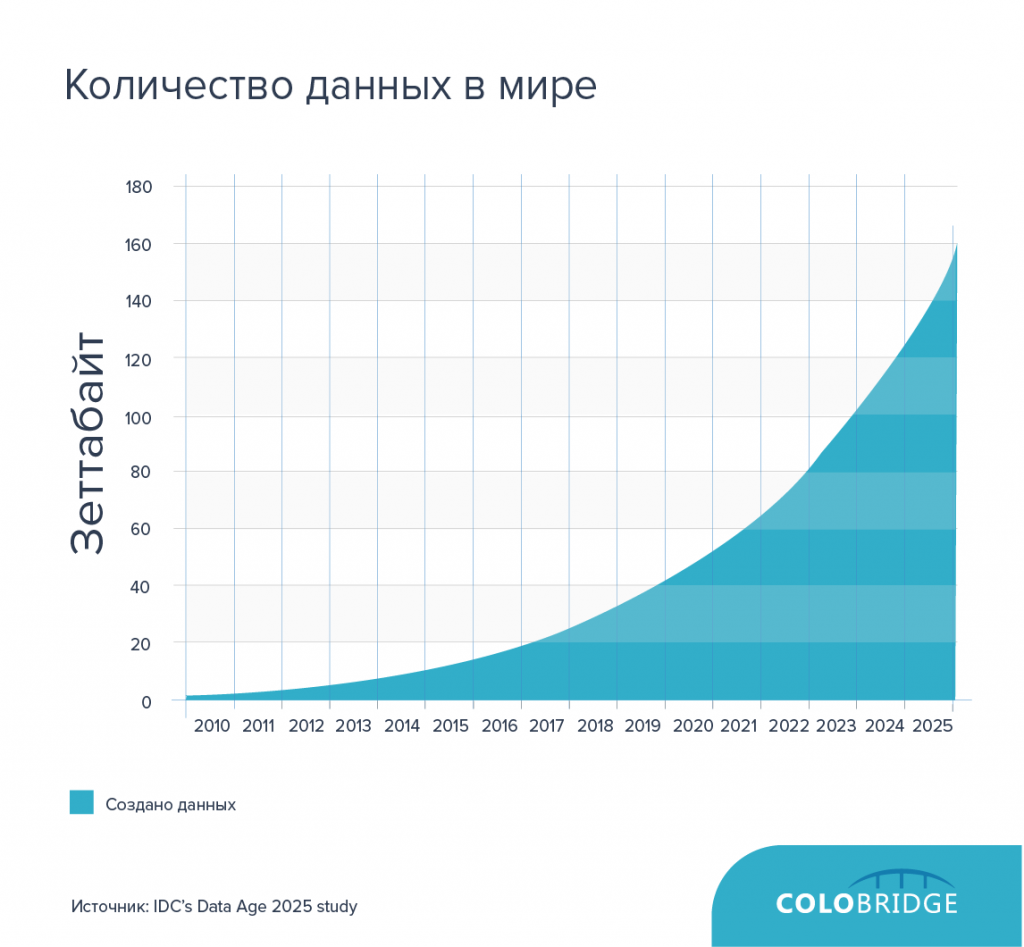 Along with the development of computer technology and its penetration into all areas of human activity the amount of data that needs to be stored is growing. In recent years, the volume of stored data has grown exponentially. According to IDC, an international research and consulting company that studies the global IT and telecommunications market, the volume of data in the world doubles every two years.

In the early days of computers, data was stored on magnetic tapes (which were handled by tape drives the size of a good cupboard) and novelty magnetic disks as large as 7 MB (which were handled by so-called HDDs – hard magnetic disk drives the size of a weighty pedestal). Very quickly this was not enough, and in a relatively short historical period due to a huge increase in the density of recording on magnetic plates of hard drives, hard drives were reduced in size to the familiar to all 3.5 “and 2.5” with capacities up to 18 TB.

The technical revolution in data storage has been the creation and rapid development of so-called Solid State Drives (SSDs), which are much more densely packed with information than hard disk drives. This has reduced their size to a microscopic 22mm x 80mm, and their lack of moving parts has significantly increased their resistance to environmental influences, primarily vibration and shock. Information storage is no longer the main point of possible failure of computer systems, despite some restrictions on the number of write cycles to SSDs, which, however, are becoming less and less stringent.

In the beginning, storage systems were integral parts of the PC. Then, as their capacity increased, they became structurally separated into separate units in their own enclosures with their own power supplies. Today, storage is divided into DAS (Direct Access Storage – directly connected to a single computer), NAS (Network Attached Storage – devices that are accessed by multiple clients over a local network) and more complex and powerful SAN (Storage Area Network – data networking) systems.

Regardless of how storage systems are accessed, the drives in them are often combined into disk arrays or RAID (Redundant Array of Independent Disks) by using data virtualization technology to combine multiple physical disks into a logical module to increase fault tolerance and/or performance.

The main RAID levels as classified by the University of California; Berkeley are shown in the following table:

Polywell Computers storage systems are designed with the latest technological advances, can be used as DAS, NAS, and SAN elements and are the best choice for the corporate user.

Request for a selection according to technical requirements